​THE WAR IN UKRAINE: A PROPHECY FULFILLED 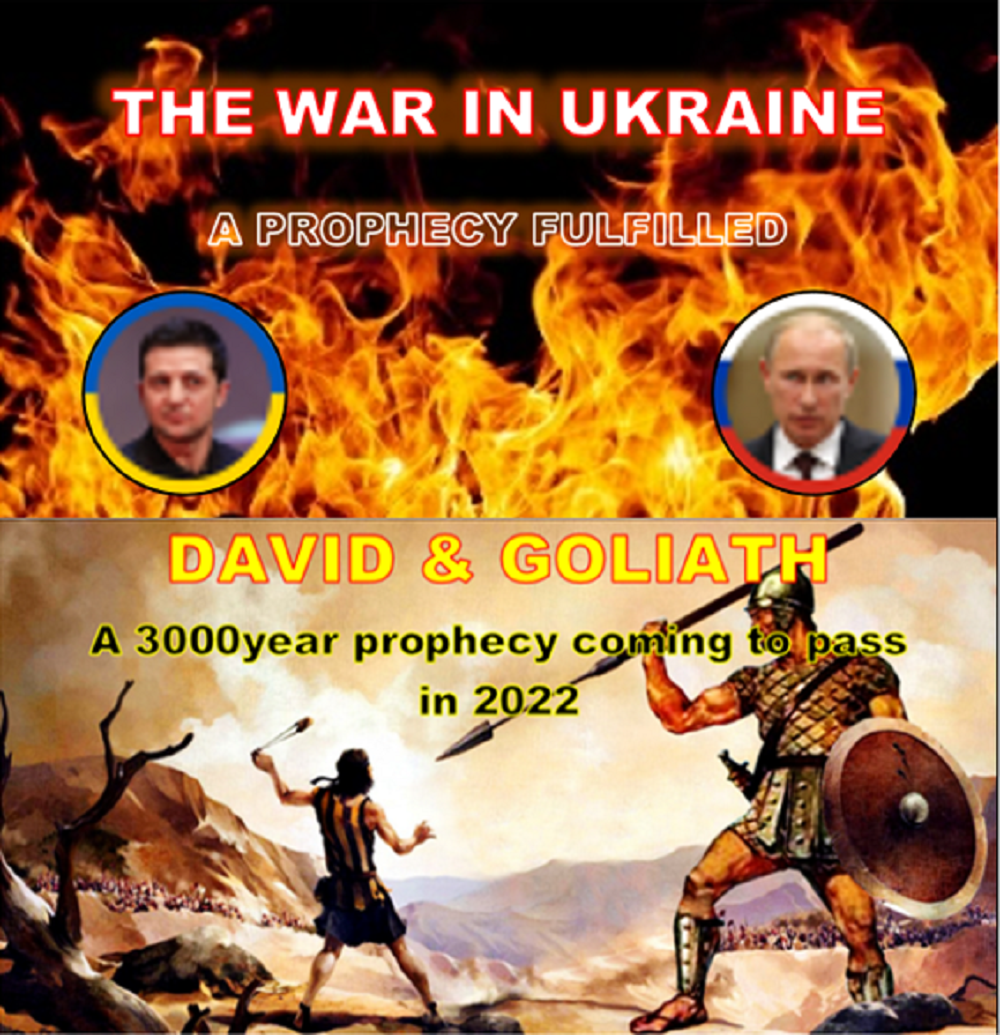 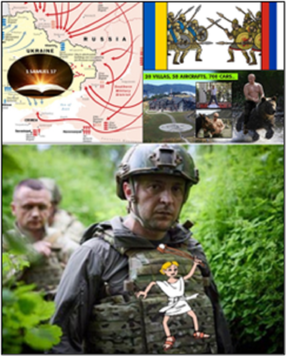 ​When Vladimir Putin invaded Ukraine on February 24th, 2022, he had no clue that he started to fulfil a Bible prophecy recorded in the 1st Book of Samuel chapter 17 and acted out in a battle of a different kind between Israel and the Philistines. Here are some comparisons: 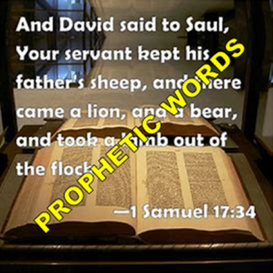 ​Where the Bible puts all doubt to rest that the fight between David and Goliath was a dramatized prophecy that would come to pass in Putin’s war on Ukraine is in verses 34 to 36 where David said to Saul.
​
“Thy servant kept his father’s sheep and there was a lion. And a bear took a lamb out of the flock… And I went out after him and smote him and delivered it out of his mouth… Thy servant slew both the lion and the bear…”

Here David did not exaggerate about what he achieved as a teenager but spoke prophetically, relating about a vision he must have had. 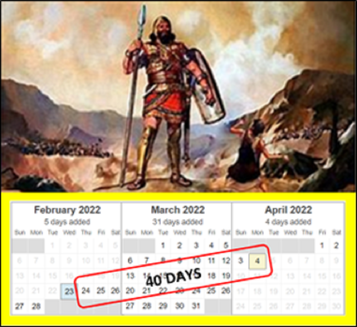 ​Verse 16 says Goliath called out the army of Israel every day for 40 days. On Monday the 4th of April 2022 it was the 40th day of Putin’s war in Ukraine which makes this date the focal point of God’s dire warning to the end time world and enabling us to link up with the Divine Destruction Calendar.

This is more than an ordinary calendar, but really a very special timetable, showing that the world’s atrocities are not random but destined to occur in their preordained slots. This schedule consists of 1,120,000 consecutive days divided into 4000 divine destruction years of 280 days, consisting of a divine 7 months, each containing a divine 40 days.

This calendar has a runup of the 40 days that Goliath called out the Israelites and on Day 40, the 1st day of the 1st month of the first of these 4000 destruction years, David killed Goliath.

​The Bible prophesies in Daniel 9:26 that this political war will continue “until the end,” alongside the religious war between Israel and Palestine, a perpetual smouldering fire that was started by Ariel Sharon on September 28, 2000 and which will soon flare up again. 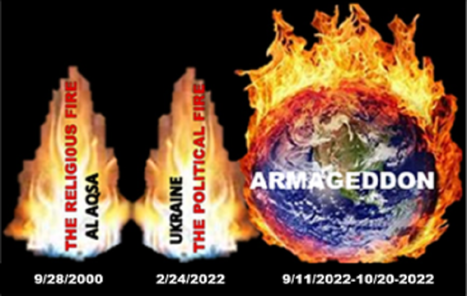 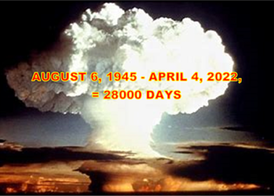 ​April 4th, 2022 has a dreadful connection to a very traumatic, and one of the most horrible events the world experienced. It is an exact 28000days after the Japanese city of Hiroshima was nuked on August 6th, 1945. This doubly divine 100 Destruction years of 7 sets of 40days is 1/40th the total length of the Destruction Calendar.

This implies a dark evil spirit behind these atrocities and is a ghastly projection about the way in which the current conflict will most probably escalate!

During this final cataclysmic year God’s wrath will unmercifully rock the boat called earth, when “the reproach of Egypt” is finally “rolled away” (Joshua 5:9) from a sinful Biblical Fifth World Order, and the Biblical Sixth World Order will rise triumphantly out of the fires of Armageddon like the Phoenix from its funeral pyre, shortly after the end of this final Destruction Year.

In the next post we will look at the concept of the Pentecostal Destruction Calendar of which its final year also starts on the prophetic day of April 4th, 2022. This calendar operates from the Flood of Noah and ends 70 days after the termination of the Divine Destruction Calendar on March 19th, 2023, giving us a different coordinate that will also take us to the end of the end time. The penultimate (6th) Biblical World Order starts one day later on March 20, 2023 and will continue until the dawn of the Seventh World Order, when Christ will return to reign perpetually. 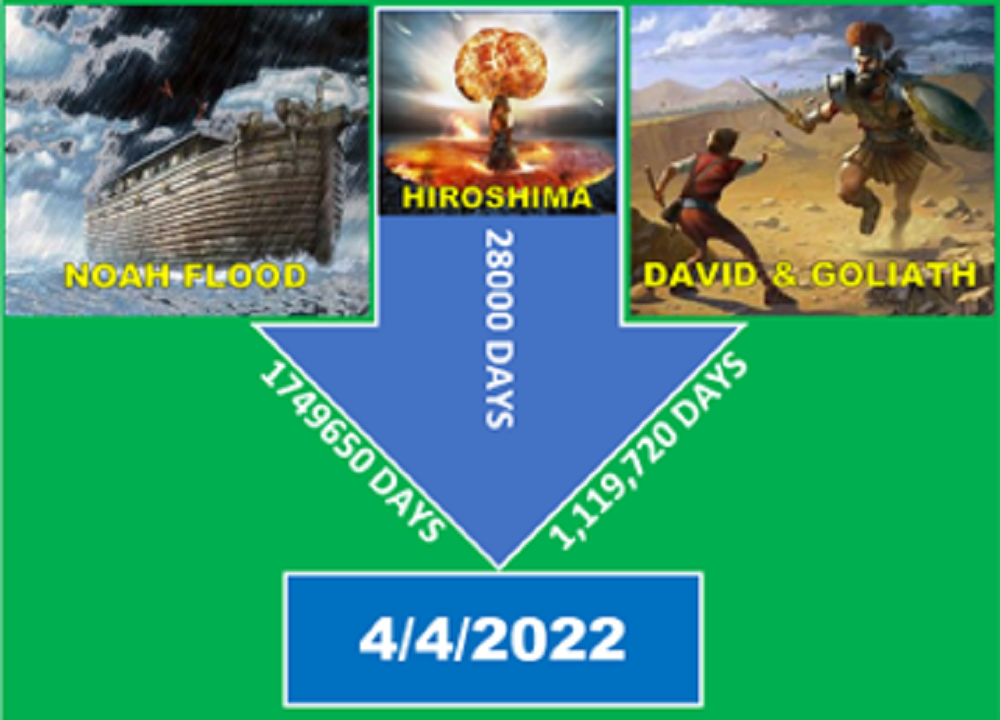