​THE DEMISE OF SOLA SCRIPTURA 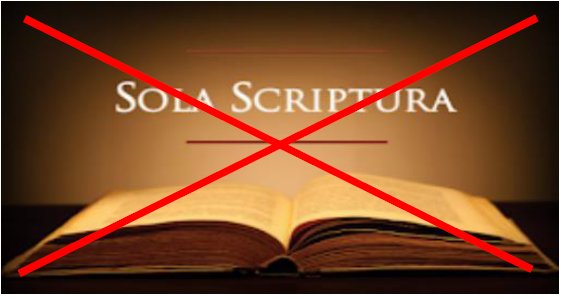 ​Reformed Churches take pride in the Sola Pillars that evolved out of the Reformation over the past 500 years. However, since the Reformation, different interpretations and theologies “built” on Scripture resulted in a fragmented Christianity that give the impression of deformation rather than reformation and even worse, fail to lead an unbelieving world to the redemptive believe that Jesus Christ is its Saviour! (see the prayer of Jesus in Joh.17)

This article is just about “Scripture Alone” (Sola Scriptura), which is supposed to be one of the main Pillars on which Christianity, and especially the Reformed Churches, is structured. But before we continue, let us first give a short explanation of what Sola Scriptura is all about:

SOLA SCRIPTURA (Latin: by scripture alone) is a theological doctrine held by some Christian denominations that the Christian scriptures are the sole infallible rule of faith and practice.

The scriptures' meaning is mediated through many kinds of secondary authority, such as the ordinary teaching offices of the church, the ecumenical creeds, the councils of the Christian church, and so on. However, Sola Scriptura rejects any original infallible authority other than the Bible. In this view, all secondary authority is derived from the authority of the Scriptures and is therefore subject to reform when compared to the teaching of the Bible.

Church councils, preachers, Bible commentators, private revelation, or even a message allegedly from an angel or an apostle are not an original authority alongside the Bible in the sola scriptura approach.

The extract here is a very good explanation of Sola Scriptura, one of Sola Pillars on which the Reformation was (and is) founded. Here is the link: https://en.wikipedia.org/wiki/Sola_scriptura

Just the current fierce debate about homosexuality and the Church is an example of how the Church is undermining Sola Scriptura in more than one way! Despite Scripture shooing us away from having lawsuits among one another, this is exactly what we are doing! Here is an extract from Scripture, and we can clearly see how we are deviating from the course set out for us by the Teachings of the Apostles, under inspiration of the Holy Spirit of Jesus Christ:

Let us have a look at just one pericope of Scripture that clearly show us how far the Church’s pillar of Sola Scriptura has sunk into the quagmire of secular thought: 1Cor.1:1-11

1Cor.6:1-8 – “If any of you has a dispute with another, do you dare to take it before the ungodly for judgment instead of before the Lord's people? Or do you not know that the Lord's people will judge the world? And if you are to judge the world, are you not competent to judge trivial cases? Do you not know that we will judge angels? How much more the things of this life! Therefore, if you have disputes about such matters, do you ask for a ruling from those whose way of life is scorned in the church? I say this to shame you. Is it possible that there is nobody among you wise enough to judge a dispute between believers? But instead, one brother takes another to court—and this in front of unbelievers! The very fact that you have lawsuits among you means you have been completely defeated already. Why not rather be wronged? Why not rather be cheated? Instead, you yourselves cheat and do wrong, and you do this to your brothers and sisters.”

Now, there may be some argument that the judges of the courts, even the Constitutional Court are not “ungodly” (v1), like in the time of Apostle Paul, but that argument doesn’t hold any water. These judges must uphold the secular law and the secular constitution of the country. They have jurisdiction over the secular lives of all members of society, no matter to which religion they belong.

However, there are other spheres of secular life where the courts have no jurisdiction. For example: Every secular club has a vision of where it wants to take its members. A rugby club wants to play rugby. A member cannot join up and declare he or she wants to play soccer in the rugby club. The Constitutional Court cannot force the rugby club by any law to accommodate the soccer player, because that person is totally out of synch with reality.

Every club has its rules and regulations to which members must abide, or face expulsion without any means of remedy by approaching the secular courts. The Constitutional Court also cannot force a male rugby club to allow female players to play in the male team, for fear of gender discrimination, etc!

Also, when internal disputes arise at a club, the members do not normally settle their differences in secular courts, unless the disputes arise from physical and psychological discrimination. Clubs appoint their own tribunals to guard over those issues. Yet, if a member of a secular club wants to take another member or the club to court, there is nothing that prevents them. In the Church it is different. The Constitution of the Church, which is the Teachings of the Apostles, advises against it.

THE MISSION OF THE CHURCH

Despite all the fancy names people want to give it, the Church is nothing but just a spiritual club. The Church has a vision, and that is the first thing that has taken the tumble in this quest to be as accommodating and loving and peace driven as it seems God ask the Church to be. So, we will have to ask ourselves the number one question: What is the REAL vision and purpose of the Church?

Yes, the vision and goal of the Church is to lead its members to the Kingdom of God. This goal flows out of the Great Commission of Christ to His Disciples to make Disciples, of which making Christians by baptising them “in the Name of the Father and the Son and the Holy Spirit” is only the first step.  “Teaching them to obey everything I have commanded you” (Mat.28:19) is taking Christians from the “ankle deep” holy water of Christianity to the unfathomable water of Discipleship. (see Eze.37:1-5 and Rev.22:1-5)

To “teach them” is to guide Christians to “carry their cross,” (Luk.14:27) to “be crucified with Christ,” (Gal.2:20) teaching them to shun the “acts of the flesh”, cultivating “fruit of the Spirit” lives and to “live by the Spirit” (Gal.5:19-26) That is the way of turning Christians into Disciples.

Disciples are those people who do not honour Jesus just with their lips and words, but those who honour Jesus with their hearts and minds and deeds and keep to the Spirit-inspired teachings of the Apostles.

Yes, the teachings of the Apostles are a vital part of making disciples and our pericope is certainly not the least of those teachings.

THE VISION AND MISSION OF CHRISTIANITY

In 1Cor.5:1-13 one gets an example of what the Church must do with members who do not share the Mission and Vision of the Great Commission, those who think that they can unashamedly carry on with a lifestyle that is contra-conducive to a path to the Kingdom of God must be brought to heel: "Expel the wicked person from among you!"

This makes 1Cor.6:9-10 a bone of contention for a divided Church. Those in charge must decide about this stumbling block. With today’s technology “cut and paste” will be easier and will look better than the “tippex” of old days. That is now “cut” it from the Bible and “paste” it somewhere else.

And while we are at it, why not go a step further and take the first 8 verses out as well? Then we can take each other to court about Church matters as it pleases us, and no cock will ever crow to remind us that we are busy denying Christ… And while we are so busy cutting and pasting, why not remove every admonition in the Bible? It will make it so much thinner and easier to read, remove King Jesus from the Throne of the Church and take us back to the time of Old Israel when “...Israel had no king; everyone did as they saw fit.” (Judges 17:6, 21:25)

I am sure that those who are so actively propagating the full acceptance of active homosexual members, even into the clergy, will be happy not to stare into the words “…nor men who have sex with men…” any longer. With those damning words removed, their consciences will allow them a free passage to the top hierarchy of the Church.

There is no escape from out of these brackets. The most gracious and loving thing the Church can do for those people in the Name of King Jesus, is to ban them to outside the confines of the Church where God can Judge over them, if they persist in actively engaging in those things. God knows better how to judge those outside the Church with compassion and mercy, taking all mitigating circumstances into consideration.

We must keep in mind that homosexuality as well as heterosexuality are states of mind, as well as the other practices mentioned in those two damning verses! Inside the Church only the CELIBATE (those who refrain from the act of being…) “sexually immoral, idolaters, adulterers, thieves, the greedy, drunkards, slanderers and swindlers”, as well as CELIBATE homosexual members can be allowed, for the Church to be in sync with the Teachings of the Apostles.

Heterosexuals must be regarded as being celibate by everybody including themselves, except the spouse to whom they “belong” (1Cor.7:4). Those who have the propensity to activate those mindsets must be taught to “carry their cross” and live celibate lives!

A PHYSICAL AND SPIRITUAL BATH

1Co 6:11 – “And that is what some of you were. But you were washed, you were sanctified, you were justified in the name of the Lord Jesus Christ and by the Spirit of our God.”

No matter which type of Baptism members went through, whether as a child, an adult, sprinkling or immersion, our minds must always keep the Covenant and our Vows alive, whether it be the parents for the sake of their children, or whether it was the believers’ own vows.

The water Baptism was our initiation into the Church, while the spiritual Baptism by the Word and our obedience takes us into the brackets of the Kingdom, from which only our disobedience will remove us from between those brackets, whether we are Church members or not.

It is only for the sake of good order in God’s Kingdom on earth and keeping Jesus Christ on the throne of the Church, keeping the Church a Divine Institution with high morals, that the excommunication of members must be strictly adhered to, according to the Teachings of the Apostles.

For the sake of the Reformation, the Church is obliged to strengthen the Pillar of Sola Scriptura. Let us remind ourselves to renew our pledge to uphold Scripture as the sole source of inspiration for our lifestyles as God’s Kingdom Members during our lives on earth.

Remember:
“…all secondary authority is derived from the authority of the scriptures and is therefore subject to reform when compared to the teaching of the Bible.”

The Reformation was not done and dusted on 31st October 1517. It is an incomplete circle (like the logo of the URCSA). The Church must reform continuously, to disallow Satan the chance to seep into its midst with his false doctrines.

Now we can go forward and see how we can accommodate active Homosexuality in the Church that will be holy and acceptable to God. Click on this link to learn more.