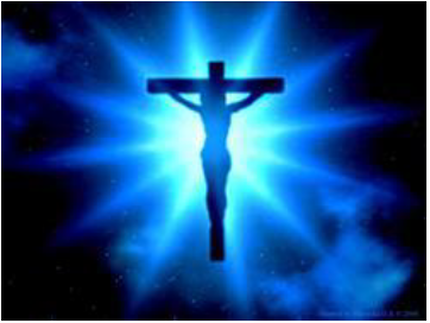 ​THE GOSPEL built on the foundation of THE LAW

​In the previous page we did the exposition of the “beast” from a Law perspective. In this article we will have to look at how the “beast” will look in the counterpart-mirror, in other words, how the Law is translated into the Gospel. So, let us straightaway  get stuck into the seven “heads” of the Christian Religion.

The Christian Religion is based upon the freedom Christ gave His followers. They have been freed from many restrictions that tell them what to pray, how to pray, how to conduct their gatherings, how big their contributions towards the church should be, whether women can be heard or not, should women’s heads be covered or not, who should be allowed in the congregation or not… The list is endless. This situation has split the Church into so many different denominations that it is virtually impossible to count them, with everyone claiming the whole truth for their particular denomination, group, or congregation!

This condition also bled through to the Sacraments. Some denominations acknowledge only two (Holy Communion and Baptism) while another sense there should be seven (the Divine number) but their choice of some of these Sacraments does not satisfy the credentials to be judged as vital “heads” of the Universal Church of Christ! One of the very first assignments of the Eschatological Moses will be to reunite the different Christian communities into a single Eschatological Tribe of the End-time Israel, before he can lead them into the future.

Now let us have a look at what these heads should be in the Christian Church. The root of Christianity lies in the 10 Northern Tribes called “Israel”. They were permanently exiled from the physically Circumcised and actually became “Gentiles” and counterparts of the Jews. In Jer.31:31-34 the Lord promised a “New Covenant” for Israel and that was confirmed by the Holy Spirit on Pentecost in Jerusalem. Heb.8:8-12 confirms that Jer.31:31-34 actually came to pass.

That means the seven heads for Christianity is reminiscent of the heads for Old Israel (The Jews of today). The new Covenant gave a spiritual meaning to the Old Covenant. OK, so let us see now what the heads of the New Covenant would look like:

What Circumcision is to Judaism, Baptism is to Christianity - an initiation ceremony. This head can be viewed as one of the most important of the seven. Membership of the Christian community starts there. Currently there are two major streams in the Christian Church. The one side favours the Baptism of a confessing Believer by immersion, while the other side favours the Baptism of a child of Believers (members) by sprinkling. Both views have merits. The Adult immersion side believes they copy the Baptism of Christ as an adult, while the other side believes they copy and translate the Circumcision of Christ when He was a baby. Baptism (water), whether by immersion or sprinkling, is on a par with Circumcision (blood) (see Col.2:11) in the sense that they are just symbols of the actual Atonement!

This Feast came as a substitute for the Passover of Israel and can be deemed the 2nd most important head. Jesus Himself did the substitution in the evening when He was betrayed. The Passover was kept remembering the night the Physical Israel left a physical Egypt. They slaughtered a lamb whose blood guaranteed that they were “passed-over” by the Destroying-angel. The Eucharist remembers the day in Jerusalem when Jesus, the Lamb of God was NOT “passed-over”, so that His Blood could guarantee that the Spiritual Israel (the Christians) would be “passed-over” by the Destroying-angel and that they can leave the Spiritual Egypt, which alludes to a life of sin.

3. The Day of Resurrection:

Head number three. Like the Sabbath was a “sign” between the Lord and His People, the first day of the week became a “sign” between the Christians and the Risen Christ. The Sabbath (on the seventh day of the week) was actually a very sombre feast day pointing into the future to the forthcoming Death of the Son of the Aion, while the Day of Resurrection point into the past to that very day when the Son of the Aion broke the shackles of the grave and by that action confirmed extending Eternal Life to the People of the Aion.

4. The Book of the Covenant:

The Christians share the history of God’s dwelling place with the Jews. While Israel was on their Exodus, they carried the Tabernacle with them. After they settled Canaan, this mobile Temple also came to rest, but this “dwelling of God” was eventually replaced with a more permanent structure that was built on a foundation on Mount Zion in Jerusalem and called The Temple of Solomon.

This Temple was the symbolic dwelling of God among his people. A vibrant Temple service was the sign of an active God/People relationship. A destroyed Temple was a sign of a destroyed relationship. Israel (the 10 Northern Tribes) did not share the Jerusalem Temple with Judah anymore, after the death of Solomon. (1Ki.12) Instead they worshipped the Golden calves set up in Bethel and Dan. Then they were exiled but returned to Jerusalem to start what is today known as Christianity. They were guests in the Jewish Temple for a relative short time, but then they moved out and started to worship God wherever two or three were gathered in His Name.

They established the idea that God was Omnipresent and He was no more bound to a geographical location, or staying in a human-built Temple. God could be worshiped in Spirit and in Truth anywhere the human finds him- or herself. Their houses or church buildings etc. became their miniature temples. It does not matter where they are meeting God in worship, vibrant temple worship was a sign of an active God/people relationship and there where members started to shun their meetings (see Heb.10:25) it was a clear sign that this precious relationship was compromised.

6. The Day of Atonement:

Where this head is the most sombre on the Jewish calendar, on the Christian Calendar this is the most glorious and happy day of the year. While Old Israel remembered this Day as the day atonement was made for historic Israel according to Leviticus 16, the Christians (should) celebrate this day as the Day the Atonement “goat for the sin offering to the Lord” (Lev.16:9), Jesus of Nazareth was born in Bethlehem. When Jesus started His public ministry, He read from the scroll of the prophet Isaiah and told them afterwards the words: “to proclaim the year of the Lord’s favour” was fulfilled in their hearing! That is exactly what the life of Jesus on earth meant. His Life proclaimed a perpetual Jubilee, and His Death proclaimed a permanent cancellation of the Debt and His Resurrection proclaimed Everlasting Life for the Peoples of the Aion.

7. The Annual Cycle of Feasts:

You will see that we have already discussed some of these feasts as different Heads. However, that does not diminish the importance of the rest of the feasts. These feasts set Christianity apart from all the other religions even from Judaism. These feasts (should) bind the people of Christianity in one close-knit unit, no matter where in the world they find themselves. On one of those feasts (Shavuot) God spoke personally with His people and gave them the Ten Commandments. Shavuot also mark the end of the Christian year, while Pentecost starts the new year of this Calendar. To be cut off from the divinely decreed feasts meant to be cut off from the People of the New Covenant as well as from the Lord of the Covenant. Israel (the Northern Tribes) was permanently cut off from the feasts of Old Israel, but the Lord gave them new feasts that rose out of the feasts of the Old Covenant, to celebrate the precious moments of the New Covenant.

So, there we are with regard to the Heads. The horns are now no big deal to identify. There are ten of them and each one wear a ruler’s crown. Kerata, (G2768) the Greek word for horns. They are a symbol of power, though horns are for an animal more than just a way of defending itself. It is also a means of disciplining its young. Paul writes in Gal.3:23- “But before faith came, we were kept under the law, shut up unto the faith which should afterwards be revealed.” This is what this verse tells us about the 10 horns with the 10 crowns. That refers to nothing less than the Decalogue or the Ten Commandments. These are God’s spoken words, cast in stone. These Commandments are the hub around which all the Law and the Prophets rotate and the very epicentre of God’s cohabitation with His People.

There is just one very important aspect of the Ten Commandments that we will have address here. Like the Law was “adapted” for the Christians, the Ten Commandments were also “reduced” to a summary of the Law of Love: “Thou shalt love the Lord thy God with all thy heart, and with all thy soul, and with all thy mind. This is the first and great commandment. And the second is like unto it, thou shalt love thy neighbour as thyself. On these two commandments hang all the law and the prophets.” (Mat.22:37-40) However, this does not mean that the 10 horns were reduced to just two for the Christians. The drawn picture will just look a little different, more like that of a stag with two stumps, with four horns governing the man to God relationship growing out of the one stump, and six that governs the man-to-man relationship from the other. 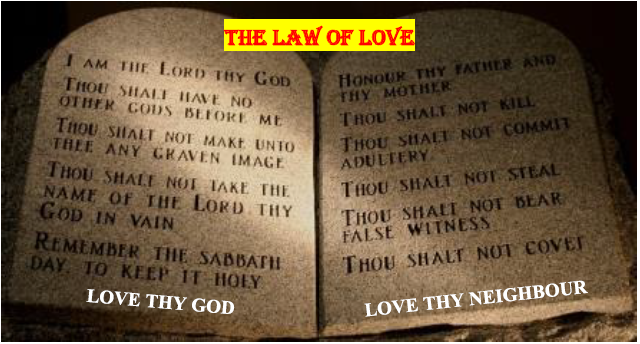 For more insight into this very important matter, please read the article The Christian Calendar.