​In Part 1 of CODE666 - THE MAN we came to the highly incredible conclusion that “the mysterious man” of Rev.13:18 actually refers to the Strong Man, Moses of the Exodus and the “beast” that stands in close relationship with Moses is none other than The Law, which is so closely allied with him that it is in fact called “The Law of Moses”!

In this chapter we’ll now have to explain why Prophet John calls this “thing” he sees a “beast”, but let me say this immediately: This “beast” is NOT an animal that can be killed by any means. The “beast” is also NOT the Law of Moses that will be “resurrected”, just as Moses will not be resurrected at this point in time. The “beast” is some great event that is on the world’s agenda for the end of the end-time. In my articles “The Man of Lawlessness” and “The Christian Calendar” I give an idea of what this apostasia is about, the unleashing of a New Christian World Order. So, the “beast” is reminiscent of the Law, yes and the end-time leader of the event is reminiscent of Moses, yes, but they are uniquely different.

To put it in a nutshell here, the event happens during the final 10years of the 2nd Exodus which started for both the Jews and the Christians on Shavuot/Pentecost of the year 30. This event is in fact a gigantic Last Reformation called the “Apostasy”, translated in 2The.2:3 (NIV) as “rebellion”, will be under the leadership of “the man of lawlessness”. This Reformation will be worldwide where the Mainstream Religions will become individual “Tribes” of the Eschatological Israel under the leadership of an Eschatological Moses, marching through time from a Spiritual Egypt to the Spiritual Jordan, the threshold of the True Promised Land here on earth.

In order to explain why the prophet draws the word-picture of the Law as a “beast”, we must now turn our attention to verse1 of Rev.13 and see what exactly is written “beneath” the lines:

Rev.13:1 - … having seven heads and ten horns, and upon his horns ten crowns…

seven heads: The Greek word is Kephales (G2776), meaning “head” and referring to the throne of life. If an animal’s head is cut off, life will drain out of it very fast. Every religion can in this sense be likened to an animal or let us rather say “beast”. Every religion has a few vital Sacraments that keep the faith vibrant and apart from the other faiths. These Sacraments are as vital to the religion as a head is to an animal or a "beast". If it loses its head, (pun intended) it will soon be kicking its last. The “beast” prophet John sees has seven different heads.

We know now that the “beast” is reminiscent of the Law, so without further ado, let us identify the seven “heads” as seven vital parts of the Law, so vital that if those people under the rule of the Law disregard just a single one of them, they can no longer be part of the System. 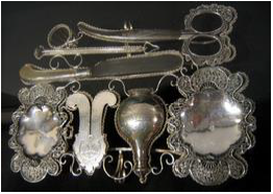 1. Circumcision:
This head can be viewed as one of the most important of the seven. Membership of the Israel community starts there – on the eighth day!  The command was harsh: “And the uncircumcised man child whose flesh of his foreskin is not circumcised, that soul shall be cut off from his people; he hath broken my covenant.” (Gen.17:14) And even worse: If you are not circumcised, you may have NO part of the Passover of the Lord: “And when a stranger shall sojourn with thee, and will keep the Passover to the LORD, let all his males be circumcised, and then let him come near and keep it; and he shall be as one that is born in the land: for no uncircumcised person shall eat thereof.” (Ex.12:48) 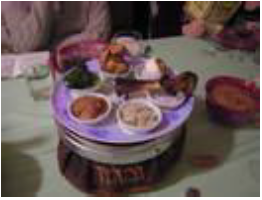 This Feast can be deemed the 2nd most important head. In fact, without the Passover the Exodus from Egypt is impossible! The Passover was so cardinal that anyone not sharing in it…! “But the man that is clean, and is not in a journey, and forbeareth to keep the Passover, even the same soul shall be cut off from among his people” (Num.9:13)

Head number three. In Ex.31:13 the Lord proclaims solemnly the Sabbath as being a “sign” between Him and His People. Here also, the Command is very strict: “Ye shall keep the Sabbath therefore; for it is holy unto you: every one that defileth it shall surely be put to death: for whosoever doeth any work therein, that soul shall be cut off from among his people. Six days may work be done; but in the seventh is the Sabbath of rest, holy to the LORD: whosoever doeth any work in the Sabbath day, he shall surely be put to death.” (Ex.31:14-15) The Sabbath is truly an extremely important “head” of the Law. When this head is cut off, Israel will lose their Identity as well as their special relationship with the Lord.

Another very important “head” that would eventually mould Israel into a very special nation. It started off as a very “thin” scroll (Ex.20: 22 – 23:33) that was confirmed by Moses with the “blood of the Covenant” sprinkled on the Book as well as the People, confirming them as the “people of the Covenant” (Ex.24). This Book grew with the People of the Covenant, later became The Written Torah and even later the Old Testament. This Book played a vital role in the relationship between the Lord and the People. He promised them that if they would abide by its Laws, they would live in His Presence “forever” but upon failing, they would be removed from their Land. This eventually happened to the Northern Tribes called “Israel” and they would never return again as Circumcised “People of the Physical Law”! The Southern nation of Judah (Benjamin incorporated) were also disobedient to the “Book of the Covenant”, were exiled, but returned again to carry the flag of Israel (all 12 historical Tribes) as well as the “Book of the Covenant” into the Eschatology. 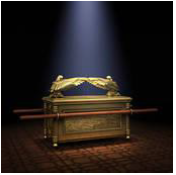 While Israel was on their Exodus, they carried the Tabernacle with them. The pic here is that of the Ark of the Covenant, the most important piece of furniture in the Tabernacle and later the Temple. After they settled Canaan, this mobile Temple also came to rest, but this “dwelling of God” was eventually replaced with a more permanent structure that was built on a foundation on Mount Zion in Jerusalem and called The Temple of Solomon. This temple was the symbolic dwelling of God among his people.

A vibrant Temple service was the sign of an active God/People relationship. A destroyed Temple was a sign of a destroyed relationship. In fact, in Rev.13:3 we read: “And I saw one of his heads as it were wounded to death; and his deadly wound was healed: and all the world wondered after the beast.” This in fact happened during the 70-year Exile of Judah, but the Temple was eventually rebuilt and the relationship healed. When the Herod Temple was destroyed 40 years after the death and resurrection of Jesus Christ, the temple service was scaled down to the level of the synagogues. 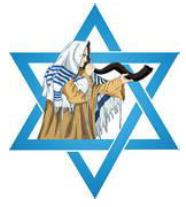 This head is the most sombre on the Jewish calendar. On this day atonement was made for historic Israel according to Leviticus 16. On this day, the Sabbath Year and the Year of Jubilee was announced when all debts were cancelled. Without this Head extraordinaire Israel would never have been Israel and the concept of the total eradication of Sin would never have materialized. For non-participation in the Day of Atonement, there was only one penalty: “For whatsoever soul it be that shall not be afflicted in that same day, he shall be cut off from among his people. And whatsoever soul it be that doeth any work in that same day, the same soul will I destroy from among his people.” (Lev.23:29-30)

​7. The Annual Cycle of Feasts:

You will see that we have already discussed some of these feasts as different Heads. However, that does not diminish the importance of the rest of the feasts. These feasts set Israel apart from all the other religions. These feasts bind the people of Israel in one close-knit unit, no matter where in the world they find themselves. On one of those feasts (Shavuot) God spoke personally with His people and gave them the Ten Commandments. To be cut off from the divinely decreed feasts meant to be cut off from the People of the Covenant as well as from the Lord of the Covenant, like Israel of the Northern Tribes were permanently cut off: “I will also cause all her mirth to cease, her feast days, her new moons, and her Sabbaths, and all her solemn feasts.” (Hosea 2:11) 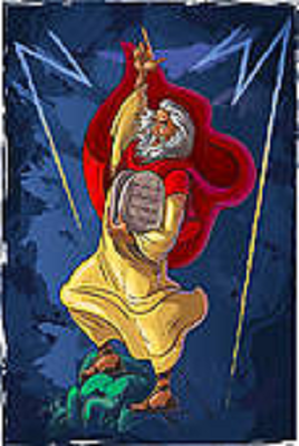 ​So, there we are with regard to the Heads. Now the horns are now no big deal to identify. There are ten of them and each one wear a ruler’s crown. Kerata, (G2768) the Greek word for horns. They are a symbol of power, though horns are for an animal more than just a way of defending itself. It is also a means of disciplining its young. Paul writes in Gal.3:23- “But before faith came, we were kept under the law, shut up unto the faith which should afterwards be revealed.” This is what this verse tells us about the 10 horns with the 10 crowns. That refers to nothing less than the Decalogue or the Ten Commandments. These are God’s spoken words, cast in stone. These Commandments are the hub around which all the Law and the Prophets rotate and the very epicentre of God’s cohabitation with His People.
P.S. For more insight into the religious feasts of the Christians and Jews, please also read this article about The Christian Calendar.